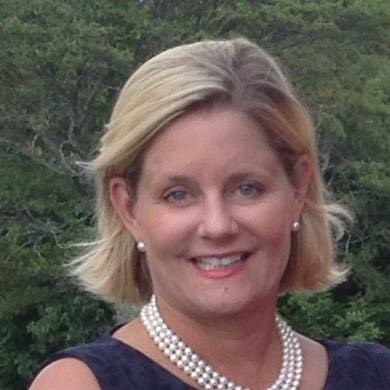 We are extremely saddened to announce the sudden passing of Jennifer Crosby Cargill in Southport, Connecticut on June 9, 2019.  Born December 2, 1965 in Bennington, VT, Jennifer was raised on the Upper West Side of Manhattan. Jennifer attended the St. Hilda’s & St. Hugh’s School from K-6thgrade and then moved to The Nightingale-Bamford School, from which she graduated in 1983. A tried and true New Yorker, Jennifer went to Hobart and William Smith Colleges and graduated with degrees in French Literature and Russian, fulfilling her dream of fluency in multiple languages.

After college she joined the training program at Lord&Taylor where she developed her extraordinary sense of fashion styling and her love of vibrant colors.   Jennifer met her husband and life-long best friend Samuel Whitney Cargill at a charity event in NYC in 1988, and in the summer of 1992 they wed in the central nave at St. John the Divine, the church on the block where she grew up. Shortly after, they moved to Pasadena, CA where Jennifer continued working in the fashion business at the LA Fashion Mart. She joined the Junior League of Pasadena where she volunteered and served as President of the chapter.

In 2002 Jennifer and Sam welcomed their first child, Samuel Whitney Cargill, Jr., followed in 2006 by  their daughter Rosalie deForest Cargill. While living in Pasadena they were immersed in community philanthropy and loved their weekend cruising to Catalina Island aboard, “Abraxis” and “Marbella.”

Sam’s work as  President of Global Accounts at AON Risk Solutions brought the family back to the East Coast where they settled in Sam’s hometown of Southport, CT, surrounded by his sister, sister-in-law, mother and multiple nieces and nephews.  Jennifer continued her philanthropic work in her new community, serving Trinity Church on the Vestry and its Nursery School Board and as a founder of the Trinity Tailgate Tag Sale. She supported many local charities, including the Pequot Library in Southport and Fairfield Country Day School,  attended by both Sam and her son Sammy.   She was also a member of the Sasqua Garden Club, Pequot Yacht Club and the Country Club of Fairfield.

In 2010 upon their return to Southport, Jennifer joined her sister-in–law Sissy Cargill Biggers as a partner in Southport Galleries, which represents American contemporary artists in a variety of mediums. Jennifer curated many exhibits and hosted lively gatherings which made the gallery an important cultural center of the village—her creativity and demure elegance always in present.

For travel directions or to sign her guest register, please visit www.LeskoPolkeFuneralHome.com

Share Your Memory of
Jennifer
Upload Your Memory View All Memories
Be the first to upload a memory!