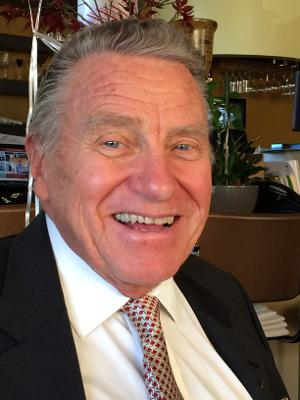 Please share a memory of Karl to include in a keepsake book for family and friends.
View Tribute Book

Karl was born in Sweden on February 10, 1936. He went to school in Stockholm, Sweden and received his degree in engineering. Karl worked for ITT Flygt AB in Sweden, but when his boyhood dream came true to go to America, he accepted a transfer in 1977 when he was offered a job at ITT Flygt -US as a director of marketing and later promoted to Vice President in 1985. Karl continued to work at ITT Flygt- US until his retirement in 2004 and was named Chairman of the board of ITT Flygt-US leading special projects. Kie loved his work and the people he worked with and really gave 110 percent every day to his work, coworkers, and friends. When Kie said he loved you, you really felt loved.

Kie was a great lover of music and always played keyboard at home and at parties. He also played the accordion and was a great singer and loved to dance. He had said he wanted to be an entertainer if his dream of engineering did not come true. Karl is preceded in death by his parents, Ragnar and Margit Eriksson; his first wife, Kerstin; and his son, Bengt.

In lieu of flowers, memorial donations in memory of Karl (Kie) may be made to Lewy Body Dementia (LBD) or the Alzheimer Association.

Karl I. (Kie) Eriksson joined Flygt, AB in in Sweden early in November of 1962, coming over from the Ahlstrom Pump Company.

During his time at X-AB in Sweden, Kie would rise to the position of Director or RD&E for Flygt electric submersible pump products. At RD&E, Kie led a group of wise and clever engineers who looked to develop innovative submersible products and then let the marketing group find the customers for them.

Kie possessed a high technical knowledge level of pump hydraulics and pump design. He was an excellent leader, having equal parts an engineer, teacher, technical information presenter, cheerleader, entertainer, mentor and friend. I do not recall a time when he was not upbeat and positive about business and about life. Kie’s Connecticut license plate was KIE110 as he stated that he always gave 110% towards anything he did.

In January of 1993, upon the retirement of FUS founder and long-time President Bengt Bjernfalk,  Kie became the Managing Director of ITT-Flygt US. Kie would serve in this capacity for 11 years until his retirement in 2004. Under Kie’s leadership, FUS sales would flourish and continue upon its sales growth trajectory. Upon his retirement, Kie was named the Chairman of the Board of ITT Flygt-US, leading special projects.

Recalling Kie’s own words regarding being an entertainer,  during the initial “Bring Your Daughter to Work Day” event at ITT Flygt-US, my daughter interviewed Kie in the FUS HQ studio inquiring “if not engineering, what career would you have liked to pursue?”  Kie immediately responded that he might have liked to have been an entertainer!

Many of us have seen the movie parodies which the FUS advertising agency developed and produced on two occasions to be shown at FUS National Sales Meetings; “The Return of the Bibo Kid” (parody of the “Gunfight at the OK Corral”) and the opening scene from the movie “Patton” where Kie respectively played the western town Marshall and reprised the George C. Scott role as General Patton.

The entertainer part of his being shown brightly, exhibited in these movie parodies as well as forefront at FUS Sales Meetings.  Resellers and direct sales staff alike were always excited to see and experience the Sales Meeting theming, surprises and presentations that would be instore which served to energize to “Sell More Pumps and Mixers!”, and in speaking of the competition… “Kill the Bastards, (legally)”, leaving energized to do just that.

As testimony to his management and leadership skills, Kie was called back temporarily to Europe by ITT Flygt, AB leadership on three occasions:

After his retirement from ITT Flygt, Kie consulted with SolarBee™ (a Medora Company) for several years bring his acumen for technology, marketing and sales into that company, resulting in increased sales and the broadening of SolarBee™ product knowledge within the water-environment consulting engineering community.

Share Your Memory of
Karl
Upload Your Memory View All Memories
Be the first to upload a memory!
Share A Memory