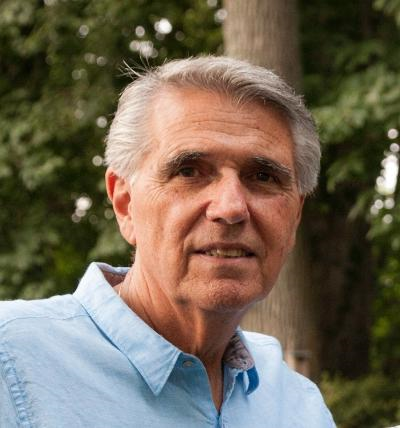 Please share a memory of Dominick to include in a keepsake book for family and friends.
View Tribute Book

The end of Rocky III, the private rematch at Mighty Micks Gym, as Rocky Balboa and Apollo Creed walk into the ring, older, slower, battered and bruised, but out of respect for each other they go at it one last time.

Apollo Creed :You know, Stallion? It's too bad we gotta get old, huh?

And so, as this story goes, on Monday, November 7th, Dominick Joseph Caputo Jr., fought his last fight and went down in defeat with as much honor and dignity as he lived his entire life. He was a true man of integrity and a fighter who "just kept punchin" until the very end. I know his memories, his life, his legacy of beauty in the world will fill many people with the incredible joy he felt for life, his family, his friends, and all those who encountered him. Long live the beauty that comes down and through and onto all of us.

He was born on September 15, 1940, in Brooklyn New York. He was preceded in death by his parents Dominick and Connie, his brother Roy, and his former wife Ina. He is survived by his wife Barbara, his children Marc and Cindi, his stepchildren Joey and Brad, his brother Frank, and his grandchildren Max, Quinn, Zane and Talia, his daughter-in-law Stacey, and his son-in-law Nathan, several cousins, nieces, nephews, great nieces and nephews, and countless other loved ones.

Everyone who knew Dom felt his big heart, his quiet strength, his calming presence, cool demeanor and giving nature. From his early days growing up in Bensonhurst Brooklyn, where we got a peek at his childhood through the lens of the tv show Welcome Back Kotter and New Utrecht High School. His father, Dom Sr's legacy, Caputo's Pork Store, where Dom, or Junior as he was called, and his brothers grew up working in and becoming a fixture in the store and community for many decades formed his teenage years. He waxed poetic about his love for the Brooklyn Dodgers and the games at the polo fields.

Personally, to those he touched across the travels of his life in Trumbull Connecticut, where he coached every sport there was and was a fixture at the Trumbull Racquet Club to Madison Connecticut where he and Barbara were local fixtures in the bookstore, the coffee shop and could always be seen enjoying lunch in his car sitting at the beach where he found peace. Recently he enjoyed his time walking the beach in Florida and his recent move to Old Saybrook, where he was closer to family. He will be missed by all he touched in more ways than he will ever know.

He lived an entire lifetime truly at service of others, and in doing so his career flourished, from working as an accountant at Gulf & Western, to a short stint as an auditor for the IRS, don't hold that against him, to his encounter with Milton Mann who embraced him as a partner and served as a mentor which led to his legacy through Mann and Company.

And for those who worked with him professionally, he never had clients he had friends. His fiduciary responsibility was in his nature, he served purely with best intentions, always and all ways. A lifetime of serving others and not a single complaint, ever, not even any Twitter beef or Instagram hate. He was truly a man of honor, dignity, and respect and one whose words aligned with his actions. He was the rare gem.

A celebration of his life will be held at the Lesko and Polke Funeral Home 1209 Post Road, in Fairfield Center on Monday, November 14th from 5 to 8 p.m. We will have a memorial service on Tuesday November 15th at St Thomas Church in Fairfield at 10:00 a.m. followed by his burial at Oak Lawn Cemetery in Fairfield.

The family would like to thank the ER and ICU staff at Yale New Haven Hospital for their compassionate care for Dom during his time spent there. They'd also like to thank everyone involved in his care and rehabilitation at Gaylord Specialty Healthcare last year for providing them with an extra year and a half to spend with Dom. To honor all they did the family asks that in lieu of flowers please make a donation to Gaylord Hospital at; Dom Caputo Memorial https://give.gaylord.org/campaign/dominick-j-caputo-memorial/c445929

Share Your Memory of
Dominick
Upload Your Memory View All Memories
Be the first to upload a memory!
Share A Memory