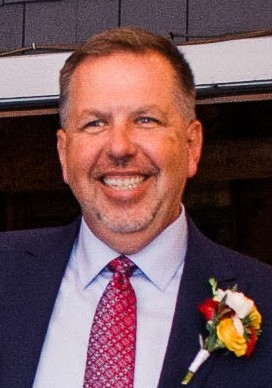 Richard G. Mach, Jr., age 55 of Bowie, MD, beloved husband of Michelle Canady, died Wednesday, June 29, 2022, at home with his family by his side after a courageous fight with cancer.

Richard grew up in Bellingham, MA, graduating from Mount Saint Charles Academy in Woonsocket, Rhode Island. He then studied Mechanical Engineering at Villanova, and trained in the Naval ROTC program. Richard served in the Navy after graduation where he earned a National Defense Service Medal. Richard later earned a Master’s of Public Administration while working full time.

After serving our country as an active duty officer in the U.S. Navy, Richard embarked on a long and distinguished career as a civil servant in the Department of the Navy. At the peak of his career, he served as the senior policy expert for Navy and Marine Corps programs worldwide on cleanup of hazardous waste and munitions sites and compliance with environmental water regulations. In several important instances, he provided his expertise directly to the Secretary of the Navy. Richard also served as the Navy representative on related Department of Defense and federal policy boards and task forces. He spoke for and represented the Navy as a senior official at federal agency engagements, as well as with members of Congress, state and local governments, the public, the press and private industry.

Over his 32 year career, including 16 years at Naval Facilities Engineering Command and 16 years on the Secretary of the Navy’s staff, Richard became an authoritative voice in the Department of Defense and beyond. He made impactful contributions as a strong advocate for the environment and naval equities. Richard was a larger-than-life figure who commanded respect, and drew people toward him because of his keen intellect, prodigious talent and generous heart.  He had an amazing sense of humor, ability to communicate and a knack for creative solutions to hard problems that supported the warfighter every step of the way. He was universally known for his technical expertise and encyclopedic knowledge of environmental issues. The loss of this great man is significant for everyone who was touched by him, and heartbreaking for his colleagues as well as family and friends.

Richard had a big personality, and many people can talk for hours about the fun times they had with him. He will be remembered and appreciated for his serious dedication to his work. He had the strength, wisdom and memory of an elephant, his favorite animal. He was a lion with a soft heart, the focus of attention in any setting. His knowledge was unparalleled, and when he spoke, everyone listened. He set the bar for what it means to be professional, a leader, and most of all, a trusted and beloved coworker.

Richard enjoyed many passions and hobbies, including traveling, hunting, fishing, bicycling across states, wine tasting, skiing, rooting for all of the Boston professional sports and Villanova NCAA teams, cooking, and entertaining for his dear friends and family. He was always the life of the party. His big personality, sense of humor, and genuine spirit will be deeply missed by many.

Richard will be especially missed by his best friend and wife, Michelle. They shared their time together exploring the world, spending time with family and friends, and making lasting memories. Michelle, Judy, and the Mach family appreciate the outpouring of love and support throughout Richard’s illness.

In addition to his wife Michelle, Richard is survived by his mother Judy Nagy Mach of Uxbridge, Mass.; brother Christopher Mach and his wife, Amy of Parsonsfield, Maine; sister Elizabeth King of Bellingham, Mass.; several aunts, uncles, nieces, nephews and cousins; and, numerous friends throughout the U.S. and world. He was preceded in death by his father, Richard Sr.

Funeral mass will be held on July 12, 2022 at the Church of the Assumption, 98 Riverside Ave, Westport, CT 06880. Visitation at the church will start at 10:30am. Mass will be held at 11am, followed by interment with military honor in Assumption Cemetery Greens Farms. To watch the service on live stream, please visit the Church website Monday morning. (https://www.assumptionwestport.org/mass/)

Memorial donations may be made to the American Cancer Society.