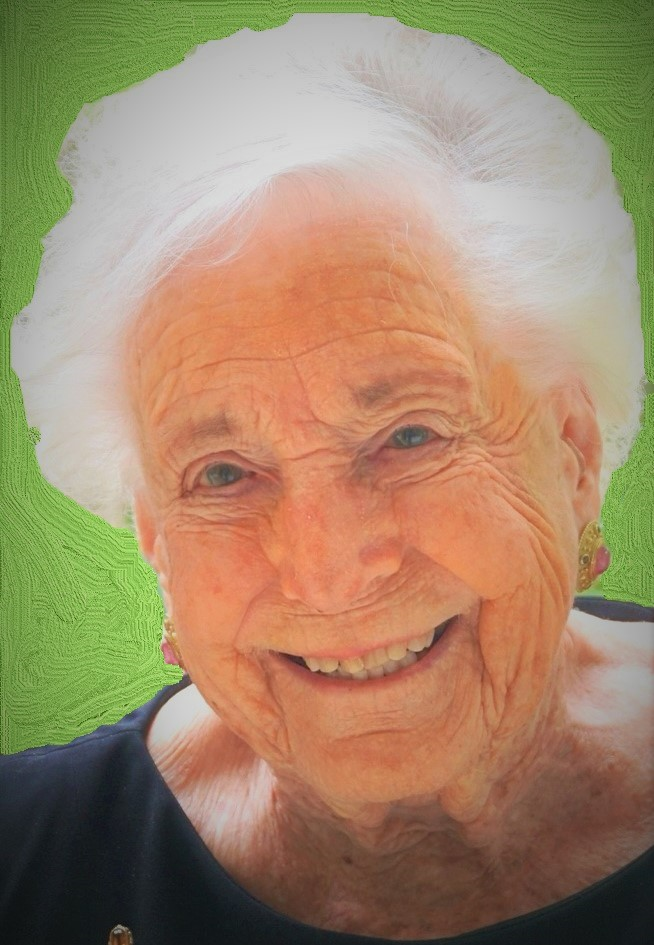 Please share a memory of Barbara to include in a keepsake book for family and friends.
View Tribute Book

Barbara, Barb, BABs, B3, Mom and Aunt Barbara – all are names she answered to throughout her life but the name she cherished most was Beaver, a name given her by her eldest grandchild.  And she was called Beaver by all who knew her well for the last forty years of her life, whether in the boardroom or at a family dinner.  A consummate volunteer across Bridgeport and beyond, Beaver found her greatest joy in supporting others, whether that be her family, young children whom she tutored in her early days of volunteering or all the other lives she touched with grace.

She was born on July 13, 1926 in Quincy, Massachusetts to the late Chester and Dorothy Butterfield. She graduated from Roger Ludlowe HS in Fairfield, CT in 1944 as co-valedictorian with her future husband, Richard P. Bodine.  Graduating from Wellesley College in 1948 with a BA in Psychology, Barb went on to teach in Manhattan at the prestigious Ethical Culture School.

In 1949, Barb married Dick Bodine. Although the Bodine name was well known throughout Bridgeport in the 70-plus years that followed, Barb would make her own personal and prominent mark on her adopted city, most notably with The Discovery Museum and Bridgeport Hospital (now Yale New Haven Hospital).  Wellesley College also benefited from Barb’s commitment.

The love of her life was her family for which she was a tireless supporter and defender. Her second love was Bridgeport Hospital.

During her tenure on the Hospital’s board of directors, Barb spearheaded the establishment of the annual recognition dinner for hospital physicians and chaired the committee coordinating the Hospital’s 100th anniversary celebration. Over the years, she also chaired the Board’s patient and public relations committee and was a member of the long-range planning committee.

In one of her last of many major efforts during her 20 years on the Hospital Board, Barb and other members of the Board’s pastoral care committee raised the funds and generated support for building and endowing the non-denominational chapel at Bridgeport Hospital which opened in 2001.  She was particularly proud of the stained glass window in that chapel and of being named an honorary chaplain.

A dedicated Wellesley alumna, Barb founded the Fairfield Villages Wellesley Club shortly after graduation. The club is still active today. She was a College trustee for three years and she served on the College’s National Alumni Association from 1982 through 1988, the last three as its president. She stepped down from that post to chair area and regional divisions of the College’s successful $150 Million fundraising campaign, at the time the largest campaign ever conducted by a single-sex institution.

Barb was a veteran volunteer at the Discovery Museum serving as chairperson of the Discovery Museum Foundation and as a Life Trustee of the Museum. She was a past chair and director of the Greater Bridgeport Area Foundation. She also Chaired the de Tocqueville Campaign for the United Way of Eastern Fairfield County for two years and was presented the Norman Leeds Award for her outstanding volunteer work.

In 1993, Barb was awarded the 125th Anniversary Founders Medal by the Bridgeport Hospital in recognition of her service. In 2017 she was honored as an Honorary Chaplain at the 30th anniversary of the Hospital’s Spiritual Care program.

In 2001, Barb was honored statewide as the recipient of the prestigious Volunteer of the Year Award from the Connecticut Chapter of the Association of Fundraising Professionals.

Services for Barbara will be held privately with her interment in Oak Lawn Cemetery.

Contributions in Barb’s memory may be made to the Bridgeport Hospital Foundation (www.Foundation.BridgeportHospital.org)  and to Financial Aid at Wellesley College (www.Wellesley.edu). To sign to her online guest registry, please visit www.LeskoPolkeFuneralHome.com

Share Your Memory of
Barbara
Upload Your Memory View All Memories
Be the first to upload a memory!
Share A Memory