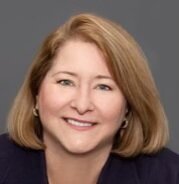 Please share a memory of Kimberley to include in a keepsake book for family and friends.
View Tribute Book

Born in North Kingstown, Rhode Island on September 10, 1956 to Dolores Foisy Wallace and the late Edward F. Wallace, Kate was the child of a United States military service family and had lived in various places around the country as well as some years in Bermuda. She graduated high school in Rhode Island and later graduated from URI and went on to the United States Naval Officers Training School to serve her country in the U S Navy retiring as a Lieutenant Commander stationed in Guantanamo Bay, Cuba.

Kate later went on to earn her MBA from the University of Texas and her Masters Degree in Hospital Administration from Western Connecticut State University. She had worked for the Information Resources Company, the O'Connell Group and most recently for Nuvance Health. Kate was an avid skiier and enjoyed her skiing trips to Colorado, Utah and Austria with her girlfriends. She liked spending her summers aboard the "Larissa" at the Miamogue Yacht Club, especially her annual trip to Block Island.

Kate was known be the first one to help others in need. She loved the times that she spent with her family and friends and will be greatly missed. In addition to Gary, her husband of 26 years, Kate leaves her mother, Dori Wallace, of Sandy Hook; a step daughter Larissa Muhall, and her husband, Michael, of Bethel; her grandchildren, Jase and Landon Mulhill; a brother, Kevin Wallace of Oregon; a brother in law, Edward Dayton, and his wife, Patty, of Danbury; as well as an abundance of nieces and nephews.

Funeral services will be held on Saturday, March 5, 2022 at 12 Noon in the Lesko & Polke Funeral Home, 1209 Post Road, in Fairfield Center. Friends may call on Saturday from 10:00 a.m. until the time of services.

In lieu of flowers, memorial contributions may be made to the St. Jude Children's Research Hospital.

Share Your Memory of
Kimberley
Upload Your Memory View All Memories
Be the first to upload a memory!
Share A Memory