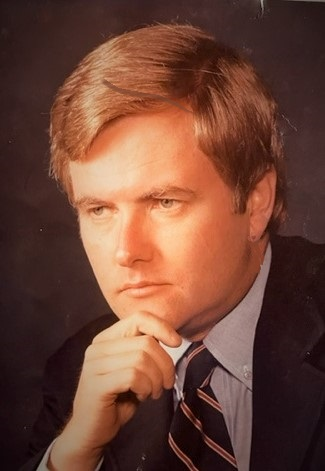 Please share a memory of Robert to include in a keepsake book for family and friends.
View Tribute Book

Robert (“Bob”) Carl Anderson, 80, died Sunday, February 20, 2022, after deciding that he’d had enough of the hospital food and it was time to leave this mortal coil for a larger and far more bountiful buffet in the afterlife.

Robert was born April 5, 1941, in Bridgeport, Connecticut.  The second son of Carl and Catherine (“Kitty”) Anderson, brother to Kathleen, legend has it that Bob spent much of his early years with the smartest person he knew – himself ; his lifelong best bud, Dr. Richard  “Doc” Link, would summarily agree. After graduating from Fairfield Prep and a brief stint at Carpenter Steel as a laborer, he realized he was better-suited for the halls of academia and set off for the cultured wilds of greater New England, hunting down professional degrees like he’d later hunt down Diet Cokes and Sweet ‘N Low at the Hotel Del Coronado’s Sunday Brunch.

He began with Fairfield Prep ‘59 then on to a Bachelor of Arts from Fairfield University ‘64 (alma mater to two of his children, and soon-to-be alma mater to one of his grandchildren).  His next stop was Yale ‘66, for a Master’s in Public Health, and he rounded out the hat trick with a law degree from Suffolk University ‘78. During his career in the Public Health Service, he reached the rank of Commander – if you never had the opportunity to salute Officer Anderson, do so now in his honor. Or put on some running shoes and go for a run – Bob was doing it long before Jim Fixx made it cool.

After a number of years living with his family in the quaint New England village of Cohasset, MA, Bob embarked on what he liked to call his “sabbatical”, from which most of us mere mortals would not have emerged.  We all told him he should have written a book. From there, Bob embarked on an entirely new life on the West Coast.  He started off small, opening up his first law practice as a sole practitioner in San Diego.  Fate soon intervened, and after meeting the legendary “Doctor” Jeffrey R. Frank, “Doctor” Robert Anderson and “Doctor” Jeff Frank opened the Law Offices of Anderson and Frank.  Their firm actually had many offices, including The Golden Lion and Souplantation, where by today’s standards they’d both have earned Diamond Premier Membership Status.

Bob spent his time away from the office in a unique variety of ways.  He befriended a founder of the early Ironman Triathlon, which led to Bob becoming an accomplished cyclist and “multi-sport” athlete.  The twists and turns of his West Coast life provided him the opportunity to be a National City Reserve Police Officer, a star in his own personal “COPS”.   He served as a Judge Pro Tem of the San Diego Superior Court. He had an amazing voice – trained or untrained – and could bring a room to tears with his renditions of “How Great Thou Art”, “Ave Maria”(which he sang at all four of his children’s weddings), “Danny Boy” and “When Irish Eyes Are Smiling”.  His answering machine greetings are those of legend.  He could walk into a hotel lobby, grab a seat on the piano bench, and soon have an audience of guests gathered to hear him play.

In the end, a New Englander at heart, his San Diego chapter came to a close.  The pull of the East Coast proved to be too much and he returned to home to be closer to his children and grandchildren.    Bob – though you may have known him by Robert, Mr. A., Grandad, Barrister Bob, UB, EScrooge Mcduck and/or Mr. R. O. Und – was preceded in death by his father (Carl), mother (Catherine), brother (Brian) and a number of close friends.  He is survived by his sister Kathleen; his four children - Kate (Billy), Michael (Jenn), Brooke (Joel), and Christian (Jennifer); 10 grandchildren - Vito Matthew, Domenic Robert, Luca Joseph, Samantha Kate, James Peter, Addison Rand, Hayden Jennie, Rand Lucas, Caroline Elizabeth, and Christian William; nephew (Peter); and his former wife, the mother of his children, Mary Rand Anderson, and numerous cousins in the UK and USA.

You are encouraged to celebrate Bob in a manner he would certainly appreciate by tucking into a sublime multi-hour meal with family and friends sometime in the near future at your nearest, dearest and most magnificent buffet. With this in mind, A Celebration of Life, or as Bob would call it, a magnificent reception with a bountiful buffet, will be held in Fairfield on Saturday May 7th with details forthcoming.

In lieu of flowers, donations may be made to Tunnel to Towers (www.t2t.org). For event detail updates or to sign his online guest register, please visit www.LeskoPolkeFuneralHome.com.

He was a man, take him for all in all, we shall not look upon his like again.

Share Your Memory of
Robert
Upload Your Memory View All Memories
Be the first to upload a memory!
Share A Memory