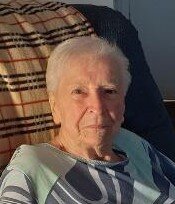 Please share a memory of Noreen to include in a keepsake book for family and friends.
View Tribute Book

Born in Bridgeport on January 12, 1931, daughter of the late William and Margaret Herb Linane, Noreen had lived in Bridgeport and Virginia Beach for most of her life before moving to New Haven in her later years. Noreen enjoyed collecting dolls, bingo, tag sales, socializing at the Senior Center, and childcare.

Survivors include her nieces, Donna Galwey, and her husband, Michael of Guilford, Margaret Mandanici, and her husband, Kris, of Ansonia, Michele Linane, of Derby and Michael Lipecz, Jr., and his wife, Kimberly, of Stratford; a sister-in-law, Barbara Linane; as well as several great nieces, great nephews and grandchildren. In addition to her husband, Arthur, Noreen was predeceased by her beloved sisters and brothers, Frances Lipecz, Margaret Jones, Jean Macura, William Linane, Donald Linane, and Constance Bomba.

As were Noreen's wishes, services were held privately.

Share Your Memory of
Noreen
Upload Your Memory View All Memories
Be the first to upload a memory!
Share A Memory