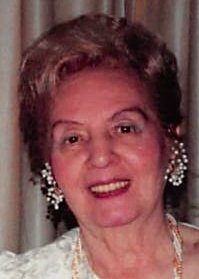 Born in her home in the city's West End, the cherished daughter of the late Michael E. Lipecz Sr and Veronica Simon Lipecz, Goldie enjoyed her childhood growing up with her parents,  brothers and her aunts, uncles and cousins who lived nearby in their mostly Hungarian neighborhood. She attended Bryant Elementary School, graduated from Bassick High School and attended Butler Business School.

Goldie received many awards for her clerical achievements in typing, shorthand and penmanship. In her younger years, Goldie did modeling, she belonged to the city's Temperance League, had worked for Columbia Records and later as Secretary to the Dean at Fairfield University, assisting with their very first commencement exercise in 1951.

Goldie met Frank, her best friend and love of her life, across from the hedge in her backyard and that of the Frank Polke & Son Funeral Home. They married in 1954. Goldie would join her husband Frank assisting in the family business and in various charitable organizations, the El Poder Caravan of International Order of the Alhambra as a Past Grand Sultana, the Fairfield Business and Professional Anchor Club, the Knights of Columbus, Fr. Coleman Council of Fairfield where she was the last surviving founding and charter member of the K of C Columbiettes.

Goldie was a devout Catholic, she belonged to the former St. Stephen's Church of Bridgeport and St. Emery's Church of Fairfield and the Church Seniors group. Early in their marriage, Goldie and Frank would often go to New York City to the then famous Luchow's and Mama Leone's restaurants and the Latin Quarter nightclub. She enjoyed travel with trips to Hawaii, vacations at the Claridge Hotel and Boardwalk of Atlantic City (prior to casinos) and the many venues that club conventions and get togethers brought her and Frank.

Goldie appreciated the water and the view of Black Rock Harbor and Long Island Sound from her balcony at Fayerweather Towers. She liked classic movies, especially Gone With the Wind and Doctor Zhivago and game shows Jeopardy, Wheel of Fortune and Lets Make a Deal.

Goldie will be fondly remembered as a true lady of elegance, grace and beauty (both inner and outer) and as a loving wife, mother and grandmother and will be missed by her son, Frank M. Polke Sr. and his wife Annemarie, grandchildren Frank M. Polke Jr. and Stephanie Marie Polke, all of Trumbull as well as her nieces and nephews Donna Galwey, Margaret Mandanici and Michael Lipecz, Tom and Chris Dolny and Eileen Faustich and Ray Stehle and their families.  In addition to her parents and husband Frank, she was predeceased by her brothers Michael E. Lipecz Jr. and Donald R. Lipecz and nephews Dennis Dolny and Edward Stehle.

Her Mass of Christian Burial will be held on Tuesday, April 23 at 11 am directly at St. Emery Chuch, 838 Kings Hwy, Fairfield with interment to follow in Mt. Grove Cemetery. Calling hours will be held on Monday from 4-8 pm in the Lesko & Polke Funeral Home, 1209 Post Road, in Fairfield Center. In lieu of memorial contributions, Goldie LOVED flowers.

The Polke family would like to thank our friend Dr. Christian Heineken for his 40 years of caring, to Tammy, Gisele, Malvia, and Ingrid, Jackie and Claire, the staff of Cambridge Manor and to Priscilla of Shamrock Home Health for all of their love and compassion that helped Goldie live with dignity and happiness in her final years. God bless You all.

To sign an online register, order flowers or to get travel directions, please visit www.LeskoPolkeFuneralHome.com

Share Your Memory of
Goldie
Upload Your Memory View All Memories
Be the first to upload a memory!