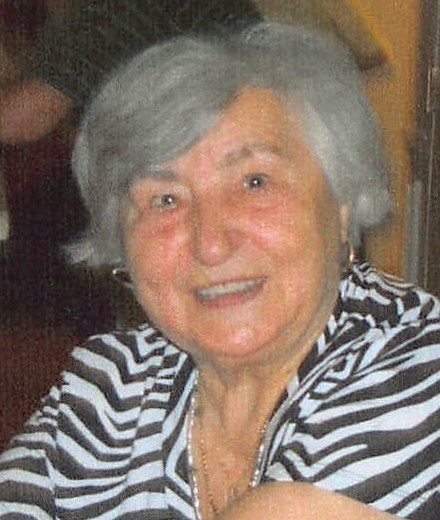 Please share a memory of Kyratsa to include in a keepsake book for family and friends.
View Tribute Book

Born on November 10, 1929 in Arabagilar, Romania, daughter of the late Gheorghe and Maria Chiosi Culcearu. The family was forced to relocate when Romania was ordered by Adolf Hitler to cede the district to Bulgaria. The family settled in Cataloi, where Kyratsa completed primary school courses and then attended middle school. She attended high school in Tulcea, and the Pedagogie Collage and became a teacher. She taught in Iulia, Niculitel, and Tulcea.

She married Constantin B. Jombur, a Greek citizen residing in Romania in 1956, and they lived in Bucharest together with their daughter Ileana until 1962 when Constantin took his young family back the Greece. Then they immigrated to the United States in 1964, living first in New York and finally settling in Fairfield, Ct where she had lived for more than 50 years.

Kyratsa worked at Perkin Elmer for over 15 years before retiring. She was a faithful member of St Dimitrie Church for over 40 years and most recently a founding member of Holy Brancoveanu Martyrs ROC.

She enjoyed cooking traditional food, sewing, gardening, caring for her home, and most especially spending time with family and close friends to whom she was devoted.

She is survived by her daughter, Ileana Jombur Sipos and her husband Ilie Emanoel Sipos of Fairfield, sisters Steriana Maci of Toronto Canada and Sultana Culcearu of Fairfield as well as many nieces, nephews and cousins in the United States, Canada, Romania and Greece. She was predeceased by her brothers Atanase, Nicolae and Sterghe Culcearu and a sister Eleana Limona.

Funeral services will be held on Wednesday, December 29 at 11 am at the Holy Brancoveanu Martyrs Romanian Orthodox Church, 554 Tunxis Hill Rd., Fairfield with burial to follow in Lakeview Cemetery, Bridgeport.

Friends may call at church on Wednesday from 10 am until the time of service.

In lieu of flowers, memorial contributions may be made to the church.

To sign an online register or to get travel directions, please visit www.LeskoPolkeFuneralHome.com,

Share Your Memory of
Kyratsa
Upload Your Memory View All Memories
Be the first to upload a memory!
Share A Memory