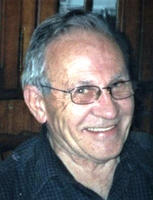 Allan William Stan, beloved husband of Doris Stan, passed away peacefully at his home in Fairfield, CT, on June 22, 2020, after a long illness. Allan was born April 21, 1930, in Jersey City, NJ, the only child of Charles Stan and Frances (Labno) Stan. Allan spent most of his childhood in the community of Lyndhurst, NJ. After graduating from Lyndhurst High School, he joined the newly formed US Air Force National Guard, serving until 1950. Later, he served in the US Army from 1954-1956 as part of the 313th Communications Reconnaissance Battalion, Army Security Agency. One evening in 1952, while roller skating with friends, Allan met Doris Franey, the woman who would become the love of his life. Their planned summer wedding was quickly rescheduled to April, due to Al’s induction into the Army. Allan and Doris were married on April 24, 1954. Upon returning home from military service, Allan and Doris settled down in Jersey City, NJ, and were able to start their life together. Allan enrolled in St. Peter’s College at night while working long hours during the day as a machinist. He eventually received a BS in Accounting from St.Peter’s and went on to receive the degree of Master in Management Science from Stevens Institute of Technology in 1966. He became a licensed CPA in the State of New York in 1967. During this busy time, he still made time to coach his sons' baseball team in the Clark NJ Pony League. Allan spent much of his career as a corporate internal auditor--work which saw him travel extensively from remote logging camps to factories all over the US, Canada, Mexico, and the UK--while working for several manufacturing companies, including Champion International, Stauffer Chemical, and Echlin. During his time with Champion International, Allan’s services were loaned to the Connecticut State Police, where his skills in forensic accounting aided in the prosecution of several corruption and organized crime cases. After a brief retirement, Allan returned to work, this time for the Internal Revenue Service. This new career brought him back into law enforcement, as a revenue agent. There, he investigated and prosecuted high-profile tax evasion cases. It is of this work that he was proudest, as Allan felt he served the good of the community. Allan and Doris shared a love of traveling. Their adventures began when Doris would accompany Al on business trips to Mexico or British Columbia; before long, they were touring the world together. Their travels brought them to sites all around Western and Eastern Europe, Russia, Scandinavia, and South America. In later years, they transitioned to cruising and spent many vacations aboard ships in the Mediterranean or Caribbean. Allan would often tell his children “It’s a big world. See as much of it as you can.” Allan loved all kinds of music, ranging from Country to Broadway shows to all kinds of Jazz. He played ukulele and mandolin and shared this love of music with his children, grandchildren, and great-grandchildren. To this day, family parties often involve a sing-along session of Allan’s favorite Hank Williams’ songs. Allan was an inquisitive, industrious type -- an authentic jack-of-all-trades. Around the house he was a carpenter, painter, paperhanger, electrician, plumber, auto mechanic, welder, and gardener. There was always a new weekend project in the works. He firmly believed that it's better to BE "the guy" than to call the guy. In addition to his wife of 66 years, Allan is survived by his children: Adele Stan of Washington, DC; Gregory Stan of Norwalk, CT; Christopher Stan and his wife, Lena Tan, and their children, Clark and Dillon, of West Hartford, CT; and Timothy Stan and his wife, Julie Stan, and their children, Katherine and Elijah, of Newtown, CT. Allan was predeceased by his son Michael Stan in 2014, and is survived by Michael’s widow, Carol Stan, of Holden, MA, along with their children: Phillip Stan and his wife, Jennifer Stan, of Gardner, MA; Megan Stan of Charlton, MA; and Kevin Stan of Holden, MA; as well as 8 great-grandchildren. A Mass of Christian Burial will be held on Friday, June 26, 2020 at 11:00 a.m. at St. Anthony of Padua RC Church in Fairfield. Friends may call on Thursday from 4:00 to 7:00 p.m. at Lesko Polke Funeral Home, Fairfield. In lieu of flowers, memorial donations may be made to the Wounded Warrior Project or to a charity of your choice.