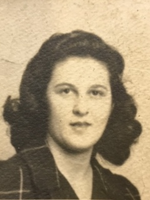 Estelle Baer, born Estelle Molly Framson, passed away at home on December 12, 2019. Born in 1923, Estelle, daughter of Charles and Sophie Framson, née Nowitz, was a lifelong resident of Bridgeport and Stratford until moving to Indio, California in 2019 to live with her daughter Shelley and son-in-law, Lenny Smith, and be near son Bill, his wife Cheryl, and their family. Together with her two sisters, Estelle was one of the original "Charlie's Angels". She graduated Harding High School and married the love of her life, Leonard (Lenny) Baer. Together they raised three children, William (Bill), Marjorie, and Shelley., Estelle worked as a bookkeeper and administrative assistant and took great pleasure in supporting the education department at the University of Bridgeport for many years. She traveled the world with Lenny while tennis and bowling kept her active at home. She was a fierce bridge player, a devoted UCONN women's basketball fan, loved shopping and going to the casinos. She had a terrific sense of humor but woe be to anyone who called her during Jeopardy. She was known for her homemade cookies and her sky-high sponge cake, which no one else can quite duplicate. Estelle enjoyed being grandmother to Erin Albren Savidge and her husband James of West Haven, CT, Brett Albren and his wife Stacey of Boxford, MA, Rachel Baer Markovitz and her husband Derek of Palm Springs, CA, and Leonard Baer of San Francisco, CA. Affectionately called "GG," she was great grandmother to Matthew and Adam Albren, Olivia Savidge and Jett Markovitz. In addition, she is survived by her beloved "baby" sister Beryl Framson Kaufman of Trumbull, her sisters-in-law Fran Baer of Titusville, FL and Selma Framson of Los Angeles, CA, and many nieces, nephews and cousins. She was pre-deceased by her parents, her husband Lenny, daughter Marge, sister Edith Framson Rosenberg, brother Eddie, and brothers-in-law Marvin Baer, Gary Kaufman and Morris Rosenberg. The family appreciates the care of her entire medical team in both Connecticut and California. Services will be private. The family will receive friends on Saturday and Sunday, February 8 and 9 from Noon until 8:00 pm at the Kaufman residence, 4 Lantern Hill Road, Trumbull. To honor Estelle's memory, donations may be made to Family Hospice Care, 255 N. El Cielo Road, Suite C-300, Palm Springs, CA, 92262.