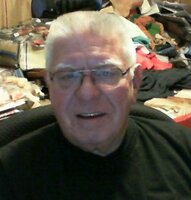 Steve G. Terebesi, age 78, of Fairfield, beloved husband of Helen Orosz Terebesi, passed away peacefully on Sunday, December 12, 2021. Born in Bridgeport, son of the late Steve and Goldie Gadacy Terebesi, Steve had been a lifelong Fairfield resident. He had worked as a systems analyst for Olin Corporation for nearly 30 years until his retirement. He was a longtime parishioner of the former Holy Trinity Byzantine Catholic Church of Bridgeport. Steve was an avid golfer, and enjoyed woodworking, puzzles, and baking; and was well known for his infamous holiday fruitcake. More than anything, he loved the times that he spent with his family, friends, and especially his grandchildren. In addition to Helen, his loving wife of 56 years, Steve leaves his sons, Steve Terebesi, and his fiancé, Sherry, of Bethel, Paul Terebesi, and his wife Amy, of Fredericksburg, VA, and Jason Terebesi, and his wife Ellen, of Fairfield. He will be missed by his grandchildren, Sarah and Shane; and his sister, Carol Jones of Fairfield. Calling hours will be held on Thursday from 3-7 pm in the Lesko & Polke Funeral Home, 1209 Post Road, in Fairfield Center with a prayer service at 6:30 pm. In lieu of flowers, memorial contributions may be made to the American Heart Association, St. Jude Children's Research Hospital or to the Connecticut Special Olympics. To sign an online register or to get travel directions, please visit www.LeskoPolkeFuneralHome.com